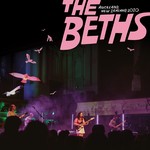 In March 2020, everything seemed on track for another huge year for The Beths. Home after an 18-month northern hemisphere tour, they had just finished recording sophomore album Jump Rope Gazers and were primed for more extensive touring. But within days, New Zealand's lockdown split the band between three separate houses. All touring was cancelled. The band found an outlet through live-streaming, returning to the DIY mentality of their early days to connect with a global audience.

Auckland, New Zealand, 2020 begins with crowd screeches and bellows. In a mid-pandemic world, playing to a heaving, enraptured home crowd feels miraculous. We are so grateful that it happened and grateful to have it documented with so much love and care, says lead vocalist and guitarist Elizabeth Stokes.

Auckland, New Zealand, 2020 has its genesis in an urge to share the now-rare experience of a live show as widely as possible. It's a collective exhalation, in one of the few countries where live music is still possible. They deliberately include the date and location, because That's the sensational part of what we actually did, says lead guitarist Jonathan Pearce.

Playing a home show still feels special for The Beths, and Auckland, New Zealand, 2020 showcases the infectious energy the band bring to every performance.

"Looking back on the strangest year in living memory for the world I am so grateful to have been able to experience live music here in NZ, a rare privilege. Somehow, through that time the musicians and audiences of Aotearoa/NZ felt closer and more supportive of each other, turned out in greater numbers and celebrated a diversity of talent. The Beths have recorded and filmed one of the pivotal events of the year, their concert at the Auckland Town Hall. Its high energy pop music for the ages." -
Neil Finn