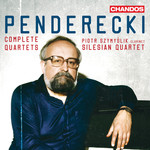 The Silesian Quartet sprang to international attention with its award-winning recordings of chamber music by Grażyna Bacewicz. Its latest project - the complete quartets of Penderecki - was started in 2012, but not completed until January 2021. Presented chronologically, the works on the album take us on a journey from Penderecki's early avant-garde 'sonoristic' style of the 1960s - the first and second quartets - to the later neo-romantic style of the third and fourth quartets, composed in 2008 and 2016 respectively. Of all Penderecki's output, the Quartet for Clarinet and String Trio shows the strongest links to the chamber music of the nineteenth century. Penderecki was inspired to write the piece by the 1992 recording by the Emerson String Quartet and Mstislav Rostropovich of Schubert's String Quintet in C major, D 956. Here the Silesian Quartet is joined by the clarinettist Piotr Szymyślik.