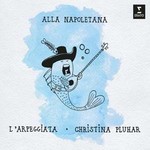 Christina Pluhar, L'Arpeggiata and eight guest singers explore the musical highways and byways of Naples, the most intoxicating and idiosyncratic of Italy's large cities. Alla Napoletana, a double album, expresses the city's mercurial personality in music from the 17th to the 20th centuries, embracing the operatic style of the so-called Neapolitan School, which rose to prominence in the late 1700s, and popular songs and dances. Among them are several examples of the tarantella, the lively, sometimes frenzied dance that epitomises southern Italy.