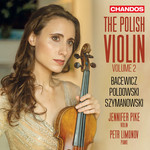 Jennifer Pike writes: 'This recording project of Polish music is one that is particularly close to my heart. The idea for the series arose from an awareness of the sound world associated with Polish music, of the country's long-held fascination with the violin, and of my own Polish heritage on my mother's side. As a successor to the first volume, released in 2019, this album continues to explore a breadth of repertoire that includes some rarely heard gems. The Violin Sonata, one of Szymanowski's earlier compositions, is a work brimming with late-romantic intensity. His Trois Caprices are a tribute to Paganini, and the famous themes are here reinvented in a visionary way: the treatment of them is not only virtuosic in nature, for both violin and piano, but also displays extremes of contemporary technique, texture, and mood that take us a world away from the concept of the originals. Bacewicz is one of the most important figures in twentieth-century Polish music - and it is my hope that the inclusion of her Caprice might serve as an introduction to further exploration of her music in recordings to come. The Kaprys polski is a favourite of mine to perform in concerts, especially as Bacewicz manages to say so much in such a short space of time. As she was herself a virtuoso violinist, it is no surprise that the piece is masterfully written for the violin. The Violin Sonata and Tango by Poldowski (Régine Wieniawska) have been tremendous discoveries for me. Her fascinating background, of mixed Polish and Belgian heritage, and the fact that she became an immigrant to Britain seem to find resonance in her music, particularly in the variety of her use of harmony. Like many other violinists, I grew up performing the music of her father, the famous violinist Henryk Wieniawski, so it was a revelation to discover Poldowski's unique compositional voice, and I hope that her music will become more widely performed.'

"Pike brings real late-Romantic sweep and panache to all those works, as well as to Grazyna Bacewicz's little solo Caprice, and a tango by Poldowski that closes the disc" The Guardian Five Stars

"Pike and Limonov take a relatively expansive view of Szymanowski's Sonata, savouring its opportunities to contrast its agitato and patetico elements, and employing relatively elastic phraseology, not least in the dolcissimo part of the first movement. Their expression in the slow movement is precisely calibrated, their ensemble now well established, and they are resolute and rhythmically vital in the finale." MusicWeb