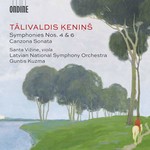 The first album of orchestral works by one of Latvia's most prominent composers, Tālivaldis Ķeniņš (1919-2008), released in October 2020 has received a warm response from music critics around the world. This second volume by the Latvian National Symphony Orchestra under conductor Guntis Kuzma includes two symphonies from the 1970s alongside another concertante gem, Canzona Sonata for viola and string orchestra.