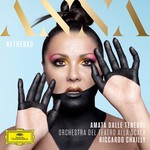 Netrebko's chosen programme features six excerpts she has never recorded before, including "Ritorna vincitor! … Numi, pietà del mio soffrir!" from Verdi's Aida; Lisa's Aria from Tchaikovsky's Pique Dame; and, in a rare incursion into the Baroque repertoire, "When I am laid in earth" from Purcell's Dido and Aeneas. As she explains: "I wanted, at least once in my life, to sing Dido, because it's such beautiful, heartbreaking music." Having made her stage debut as Elsa in Lohengrin a few years ago, she also now turns to three other major roles from the German repertoire. From Wagnerian opera we have Elisabeth and her rapturous greeting to the "Hall of Song" in Tannhäuser, and Isolde, in the iconic Liebestod from Tristan und Isolde. Netrebko describes recording the latter as "one of the happiest moments of my life … I was blissfully happy, in harmony with the music". No less spectacular is her debut recording of "Es gibt ein Reich" from Richard Strauss's Ariadne auf Naxos.

"She's in her element [as Manon Lescaut], as she is with Tchaikovsky's Lisa, where the voice sounds beautiful and the emotional trajectory is wonderfully plotted and detailed." Gramophone

"The voice is weighty, muscular and so dark-hued as to be almost contralto-like in timbre; the characterisation is never less than forthright...There is no doubting Netrebko's musical commitment, though some roles fit better than others. She is commanding as Elisabetta (Don Carlo), a role she added to her stage repertoire only last year, and in the meaty German roles." BBC Music

"there are some hugely exciting performances, like the Tchaikovsky, Verdi's Aida and Don Carlo, and a scorchingly intense death-scene from Puccini's Manon Lescaut. By and large the Wagner and Strauss items are well schooled with a decent grasp of language and character, even if they do not rival the best stylists of the past." Financial Times

"She's excellent as the juicy heroine of Manon Lescaut, while as Lisa, the thwarted romantic of Tchaikovsky's The Queen of Spades, she's superb. This is one track where our star is absolutely at home, at one with the text, the language and every twist in the music's emotions…A hit-and-miss album impossible to ignore." The Times

Purcell: Dido and Aeneas
Thy hand, Belinda...When I am laid in earth "Dido's Lament"