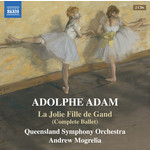 After increasing successes with ballets, melodramas and theatrical works, Adolphe Adam won widespread acclaim with Giselle.. A year later he wrote La Jolie Fille de Gand, which was received just as enthusiastically by audiences and critics alike. This delightful ballet-pantomime with trademark thematic brilliance is set in Ghent and Venice, its plot one of abduction and romance. Adam's score, which features the use of cornets and the tuba-like ophicleide, displays a more daring sense of colour than that of Giselle.