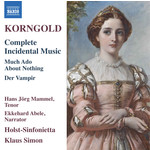 Korngold's greatest critical successes lay in the field of opera and in his film scores. The early sets of incidental music reflect these two elements, sharing the theatrical bravura of opera and anticipating his own later filmic techniques. The music for the Viennese production of Shakespeare's Much Ado About Nothing in 1920, heard here in full, is expressive and dramatic. Der Vampir, a psychological study of desire, seduction and greed, is rarely heard, but remains a potent example of Korngold's instinct for directness of characterisation.

Der Vampir oder Die Gejagten (The Vampire, or The Hunted) (concert version by C. Bauer and K. Simon, narrated and sung in German)