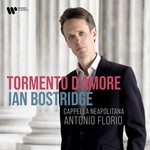 With the 10 arias on Tormento d'amore, Ian Bostridge demonstrates the important place that the tenor voice held in Italian opera from the mid-17th to the mid-18th century - often thought of as the era of the castrato. At this time, there were two main centres of opera in Italy: Venice, where such composers as Cavalli, Vivaldi, Cesti, Stradella, Sartorio and Legrenzi were active, and Naples, home to Provenzale, Caresana, Vinci and Fago. In addition to arias - two of them in world premiere recordings - the album offers five instrumental sinfonie and a traditional Neapolitan song, 'Lu cardillo', or 'The Goldfinch', a songbird closely associated with Naples. Bostridge is partnered by conductor Antonio Florio and his ensemble Cappella Neapolitana.