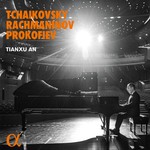 At just 22 years old, Chinese pianist Tianxu An is one of his country's most promising virtuosos. In 2019, he gained international attention by winning the fourth prize at the prestigious Tchaikovsky Competition in Moscow-presided over by Denis Matsuev, who hailed his performance as "sensational at this stage of maturity"-and a special prize for "courage and restraint" (following a score error by a member of the organization). Tianxu An has already performed with the Mariinsky Orchestra under the direction of Valery Gergiev and with the China Philharmonic Orchestra under Xiaotang Xia at the Mariinsky Far East Festival; he has given recitals in Russia and China, where he toured 19 major cities in 2021, with two of his favorite composers on the program: Rachmaninov and Prokofiev. Fittingly it is to the Russian repertoire that he dedicates his first recording. He says he is particularly attracted by the "expressiveness, emotional power and melodic freedom" of the music of Tchaikovsky, Rachmaninov and Prokofiev.

Rachmaninov: Variations on a Theme of Chopin, Op. 22