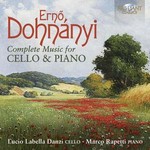 Ernö Dohnányi (or Ernst von Dohnányi as he called himself internationally) lived from 1877 till 1960, he was one of the most important and influential Hungarian composers and pianists of the 20th century. As a piano virtuoso he maintained an active career which brought him to many European countries as well as the United States. After teaching at the Berlin Hochschule he returned to Budapest, where he became the driving force of the musical life, promoting the works of his compatriots Béla Bartók and Zoltán Kodály, and teaching a new generation of Hungarian musicians.

Dohnányi's musical style is deeply rooted in German Romanticism, notably the works of Brahms, who exclaimed after hearing his first piano quintet: "I could not have written it better myself!". The great Cello Sonata Op.8, featured on this new recording, is indeed heavily indebted to Brahms, but can firmly stand on his own in its bold harmonic language, sweeping melodies and instrumental brilliance of both cello and piano. Apart from this masterwork we hear the substantial Konzertstück Op.12 and Ruralia Hungarica, a tribute to his native country and its rich folklore. • Played with passion and dedication by cellist Lucio Labella Danzi and pianist Marco Rapetti.

Dohnányi: Konzertstück in D major for Cello and Orchestra Op. 12