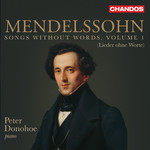 Peter Donohoe CBE is acclaimed as one of the foremost pianists of our time, for his musicianship, stylistic versatility, and commanding technique. On this first volume of Mendelssohn's Songs without Words, he writes: 'When I first became conscious of my desire to be a musician, Mendelssohn meant more to me, personally, than almost any other composer - he certainly ranked alongside Haydn, Mozart, Beethoven, and Schubert. My choice of programme for the present recording is based around a large selection from the Lieder ohne Worte, which I preface with the Rondo capriccioso, Op. 14 and the three wonderful Fantaisies ou Caprices. The Rondo capriccioso and Trois Fantaisies ou Caprices are exquisite examples of the extraordinary facility of Mendelssohn (implicitly as a pianist, but also as a composer), of his originality and inspiration, at an age that allows us, in my view, to place him in the same group of wonderfully natural and prodigious composers as Haydn and Mozart. It is always a pleasure to play these works, and they go to the heart of why I became a musician in the first place.'

"Brilliantly and excitingly played: Peter Donohoe's Mendelssohn series gets off to a great start… In this all-around successful production, which also impresses with its warm and rich sound, Donohoe's art of differentiation, his sensitive, nuanced and always wide awake touch, his outstanding technique and art of phrasing make each of the small compositions a glittery bijou." ***** Pizzicato.lu

"Donohoe bears comparison with other valued interpretations and is ever distinctive." MusicWeb recommended