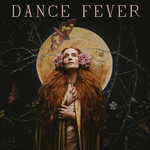 'Dance Fever' was recorded predominately in London over the course of the pandemic in anticipation of the world's reopening. It conjures up what Florence missed most in the midst of lockdown - clubs, dancing at festivals, being in the whirl of movement and togetherness -and the hope of reunions to come. It's the album that brings back the very best of Florence - the festival headlining Boudicca, wielding anthems like a flaming sword.

Starting, as ever, armed with a notebook of poems and ideas, Florence had just arrived in New York in March 2020 to begin recording the record with Jack Antonoff when Covid-19 forced a retreat to London. Holed up at home, the songs began to transform, with nods to dance, folk, '70s Iggy Pop, longing-for-the-road folk tracks a la Lucinda Williams or Emmylou Harris and more.

Once back in London, Florence teamed up with Dave Bayley from Glass Animals. With Dave's love of synths and Florence's fascination with all things gothic and creepy a kind of "Nick Cave at the club" sound started to emerge to shape the record. Lyrically, she took inspiration from the tragic heroines of pre-Raphaelite art, the gothic fiction of Carmen Maria Machado and Julia Armfield, the visceral wave of folk horror film from The Wicker Man and The Witch to Midsommar.

'Dance Fever' is an album that sees Florence at the peak of her powers, coming into a fully realised self-knowledge, poking sly fun at her own self-created persona, playing with ideas of identity, masculine and feminine, redemptive, celebratory, stepping fully into her place in the iconic pantheon.