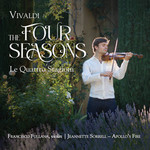 Grammy Award-winning baroque orchestra Apollo's Fire and its founder-director Jeannette Sorrell have blazed trails in the world of historically informed performance with pioneering programming, presentational flair and an entrepreneurial spirit, qualities that have earned them eight Billboard chart-topping albums and more than 7 million views on YouTube. Their latest release, which launches the ensemble's 30th anniversary season, is destined to soar to similar heights: the ensemble's first recording of the perennial audience favourite, Antonio Vivaldi's The Four Seasons, featuring the phenomenal Spanish-born fiddler Francisco Fullana. Frequently performed at Apollo's Fire home base in Cleveland, Ohio and on their international tours, "Sorrell's vivid approach to the pictorial elements make these familiar works seem freshly minted, full of astonishing incident", according to Seen & Heard International. Fullana, winner of the 2018 Avery Fisher Career Grant, has been dubbed a "rising star" by BBC Music Magazine, and an "amazing talent" by conductor Gustavo Dudamel.

The Four Seasons is the first of several releases spread throughout the season celebrating Apollo's Fire's milestone 30th anniversary.

"Fullana and Sorrell's brilliant baroque band from Cleveland reveals Vivaldi's most popular work in spring-cleaned colours, like the restoration of an old master." - The Sunday Times (No. 3: Top 10 Classical Albums of the Year 2021)

"Fullana reveals its poetry with effortless refinement and rhythmic elasticity. He is not afraid to be carried off into personal flights of fancy…What I enjoyed most of all in the affectionate and carefully thought out playing of soloist and ensemble is their relaxed phrasing and crisp articulation which generate unflagging interest." BBC Music