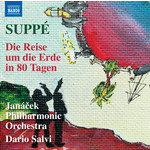 Franz von Suppé became famous all over the world for the easy brilliance of his operetta melodies. He also achieved great success with theatrical stage music, including this version of Jules Verne's adventure novel Around the World in 80 Days. Verne's interest in science and new discoveries reflects the optimism of the late 19th century, and Suppé's music is a perfect reflection of the light and dark in the narrative, evocatively tracking Phileas Fogg's enterprising and at time dangerous voyage, and taking in the exotic orient and Gold Rush America along the way.

Franz von Suppé's music is best remembered today in numerous operetta overtures, but what is less well known is that he composed a great deal of music for the stage, his facility for vivid description in music making his work prized in 19th-century Viennese theatrical circles.

The stage version of Jules Verne's Die Reise um die Erde in 80 Tagen was made not long after the original novel's publication, but while Around the World in 80 Days has become an iconic tale through numerous classic films, Suppé's expressive music for the story has until now been largely forgotten. This world premiere recording of a musical journey alongside Phileas Fogg, Passepartout and the rescued Princess Aouda is sure to
grab the attention of all kinds of listeners, and we are delighted to be able to add it to the Naxos catalogue.