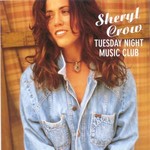 Her timeless debut, featuring the hits "Run Baby Run", "Leaving Las Vegas" and "All I Wanna Do"!

"At the time of this writing, and after having recently recovered from successful breast cancer surgery, Sheryl Crow remains one of the most enduring female singer / songwriters of our time.

All of Sheryl's roots-rock recordings over the years have long reflected the musical passions that inspired her back when she was growing up in Kennett, Missouri. However, it was with her breakthrough debut 'Tuesday Night Music Club' (issued in 1993), that she first defined her distinctive voice, exploring a plethora of emotions and staking fertile turf as a gifted musician in her own right.

Containing many abiding tunes, 'Tuesday Night Music Club' showcased Sheryl's extraordinary musical talents perfectly. It harnessed a certain "feel good" factor, with melodies that skip and prance through your head long after the CDs 11 cuts have run their course. The first two pieces - "Run, Baby, Run" and "Leaving Las Vegas" - were very popular and along with the massive FM hit, "All I Wanna Do" provided the soundtrack for much summer fun throughout the rest of the '90s. Other notable songs included here are the heartfelt acoustic number "Strong Enough", the lyrically beautiful & touching "No One Said it Would be Easy", plus the moody jazz musings of "We do What We Can".

Over the course of her career Sheryl has been the recipient of no less than 8 Grammy Awards, making her one of pop's most exceptional artists. Her outstanding musical "rite of passage" has also seen her work with such revered superstars as Eric Clapton, Rod Stewart, Michael Jackson, Joe Cocker, Keith Richards, Stevie Nicks and Don Henley. It must be said though that she has always been more concerned with creating fantastic records than with making the pages of celebrity-filled tabloid magazines.

Sheryl Crow is a chameleonic artist who crosses all preconceived boundaries to put her music first. Whilst this is quite apparent on all of her 7 full-length albums to date, 'Tuesday Night Music Club' remains her finest effort and an unyielding favourite among aficionados."
-GEOFF / MARTY (1st April 2006)