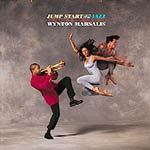 Pulitzer Prize-winning composer and musician Wynton Marsalis does it again .

Pulitzer Prize-winning composer and musician Wynton Marsalis does it again with Jump Start and Jazz, an album of original music composed for modern ballet.

A fixture on the American cultural scene, Wynton Marsalis has brought jazz back to centre stage in the U.S.A. through his relentless work ethic and drive. He is also a distinguished classical performer whose many recordings for Sony Classical have been an important aspect of his career since it began. In 1997 he became the first jazz musician to win the Pulitzer Prize in music, for his epic oratorio on the subject of slavery, Blood on the Fields. As a composer and performer, Marsalis is also represented on a quartet of Sony Classical releases, At the Octoroon Balls: String Quartet No. 1, A Fiddler's Tale, Reel Timeand Sweet Release and Ghost Story: Two More Ballets by Wynton Marsalis). All are volumes of an eight-CD series, titled "Swinging Into The 21st", that is an unprecedented set of albums released in the past year featuring a remarkable scope of original compositions and standards, from jazz to classical to ballet, by composers from Jelly Roll Morton to Stravinsky to Monk, in addition to Marsalis.

At the Octoroon Balls features the world-premiere recording of Marsalis' first string quartet, performed by the Orion Quartet. The work was commissioned by Lincoln Center, and its premiere by the Orion Quartet in 1995 was presented in conjunction with the Chamber Music Society of Lincoln Center. A Fiddler's Tale, also commissioned by the Chamber Music Society of Lincoln Center for MARSALIS/STRAVINSKY, a joint project of the Chamber Music Society of Lincoln Center and Jazz At Lincoln Center, is work with narration about a musician who sells her soul to a record producer. It was premiered on April 23, 1998, at Hill Auditorium in Ann Arbor, Michigan. A version without narration was included on the album At the Octoroon Balls: String Quartet No. 1. Reeltime is Marsalis' score for the acclaimed John Singelton film Rosewood. This original music, featuring vocal performances by best-selling artists Cassandra Wilson and Shirley Caesar, was never used in the film and is available here for the first time. Sweet Release and Ghost Story offers another world premiere recording of two original ballet scores by Marsalis, written for and premiered by the Alvin Ailey American Dance Theater and the Zhong Mei Dance Company, both in New York City.

As an exclusive classical artist for Sony Classical, Marsalis has won critical acclaim for the recording In Gabriel's Garden, featuring Baroque music for trumpet and orchestra. It includes performances of Bach's Brandenburg Concerto no. 2 and Mouret's Rondeau, a video of which has been adopted as the new theme for PBS's Masterpiece Theatre. The San Francisco Examiner wrote, "Marsalis continues to define great musicmaking…[the pieces] are all articulated with dazzling clarity and enthusiasm." The album features the English Chamber Orchestra, conducted by Anthony Newman, and was produced by Steven Epstein.

Marsalis' other Sony Classical recordings include concert, chamber and solo music for trumpet from the Baroque, Classical, Romantic and 20th-century repertoires.

Marsalis' recent release, Classic Wynton, is a collection of the artist's work, featuring music for trumpet from the Baroque era to the twentieth century. Highlights of the album include a duet with Kathleen Battle from the best-selling recording Baroque Duet, Mouret's "Rondeau", Clarke's "The King's March" and "The Prince of Denmark's March", a movement from Bach's Brandenburg Concerto No. 2 and Stanley's "Trumpet Voluntary". Classic Wynton also includes a previously unreleased track - The Prayer of St. Gregory by Hovhaness.

Other recent Sony Classical recordings include Jump Start & Jazz, which features Marsalis' first ballet scores, written for two choreographers, Twyla Tharp and the New York City Ballet's Peter Martins, and LIBERTY! The American Revolution, the soundtrack by Mark O'Connor to a three-part, six-hour PBS dramatic documentary series by the same name about the birth of the United States. O'Connor composed the duet for violin and trumpet "Brave Wolfe" (a tribute to the heroic death of British General James Wolfe) specifically with Wynton Marsalis in mind.

Born October 18, 1961, in New Orleans, the second of six sons of Dolores and Ellis Marsalis, Wynton Marsalis began studying trumpet seriously at age twelve. During high school he performed in local marching bands, jazz bands, funk bands, and classical orchestras, and at age eighteen he moved to New York to attend the Juilliard School of Music. In the summer of 1980, he became a member of Art Blakey's Jazz Messengers and that same year signed with Columbia Records. Since his self-titled debut was released in 1982, Marsalis' numerous jazz and classical recordings for Columbia and Sony Classical have sold nearly five million copies world wide. He has taken his jazz groups to thirty countries on six continents, averaging more than 120 concerts per year for many of the past sixteen years.

Marsalis serves as artistic director for the internationally recognised Jazz at Lincoln Center program, which he co-founded in 1987. Under his leadership, the jazz department earned the distinction of being named Lincoln Center's first new constituent organisation since 1969. Several commissioned works for the program are among his most recent successes as a composer. The oratorio Blood on the Fields, written in 1994, was named one of the top ten music highlights of the year by Time magazine. The New York Times Magazine said the work "marked the symbolic moment when the full heritage of the line, Ellington through Mingus, was extended into the present. It also reflects a full awareness of Copland and Stravinsky."

An international tour for Blood on the Fields, presented by Jazz at Lincoln Center in early 1997, featured vocalists Cassandra Wilson, Jon Hendricks and Miles Griffith with the Lincoln Center Jazz Orchestra. The work was released as a three-CD set by Columbia in April 1997. The extended septet work In This House on This Morning, which was premiered at Lincoln Center in 1983 and released on CD by Columbia in 1994, was termed "a spiritual feast" and a "masterpiece" by Ebony magazine. Another important Lincoln Center commission, Marsalis' first string quartet, (at the) Octoroon Balls, was premiered by the Orion String Quartet in May 1995 and was presented in conjunction with the Chamber Music Society of Lincoln Center.

Marsalis has also shown a special interest in composing for dance. His Sony Classical recording Jump Start and Jazz features Jazz/Six Syncopated Movements and Jump Start, which were written for ballets by Peter Martins and Twyla Tharp, respectively. The New York Times rated the score of Jump Start as simply "superb," and Newsweek wrote that Jazz contained "verve and vigour rarely heard at the ballet." Sweet Release, a recent commission from Jazz at Lincoln Center, was his first collaboration with Judith Jamison of the Alvin Ailey American Dance Theatre and a work that The New York Times described as "sly and exuberant." Marsalis also collaborated with Garth Fagan to create a three-movement symphony for seven pieces, Citi Movement/Griot New York, his first music for dance as well as his first extended work. He recently wrote Ghost Story for New York's Zhong Mei Dance Company.

Education continues to be a top priority for Marsalis. One of the most successful aspects of the Jazz at Lincoln Center program has been Marsalis' Jazz for Young People series, which has become a favourite of New York audiences. Throughout the year, Wynton schedules meetings with students wherever he is, and while on the road with his bands he regularly conducts master classes in local schools. The 1996 Peabody Award he won for Marsalis on Music also recognised his informative twenty-six-part National Public Radio series, Making the Music, which was based on Jazz for Young People.

This release of a companion book with CD for Marsalis on Music followed the publication of Marsalis' 1994 book, Sweet Swing Blues on the Road, an in-depth chronicle of his touring life. His personal thoughts are accompanied by Frank Stewart's photographs in this firsthand portrayal of the travels and camaraderie of a jazz band. The Los Angeles Times Book Review described the book as "laden with insight and anecdote and a lexicon unique to modern-day jazz," and Jazz Times praised Marsalis by saying, "He writes warmly and well about his men as a group, and about their musicianship and personalities," adding further that the book is replete with "original thought and expression."

Marsalis has been awarded the Grand Prix du Disque of France and the Edison Award of the Netherlands, and was elected an honorary member of England's Royal Academy of Music. In recognition of the many hours he has contributed to music education, community organisations, and charities, he has been given keys to cities across the country, all types of community service awards, and a congressional citation. In May of 1997 he received honorary doctorate degrees from Rutgers University and Amherst College; these honours will be added to the list of colleges and universities that have recognised him, including Yale, Princeton, Brown, Columbia, John Hopkins, Brandeis, the Manhattan School of Music and the University of Miami. He was profiled by 60 Minutes in December 1995. He has been the subject of cover stories for Life magazine, Time magazine, Parade, the Sunday New York Times Magazine, the Sunday Los Angeles Times Calendar, London Times magazine and Esquire (UK), as well as numerous appearances on the covers of Jazz Times, Downbeat, and Jazziz. In 1996, Time magazine named him among America's twenty five most influential people.