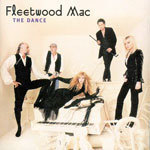 Inasmuch as Fleetwood Mac's classic 1970s albums drew much of their charm from their quirky arrangements and fastidious studio craft, it's a bit odd that the band would choose to reunite with a live, largely unplugged album. But somehow, the first album by the Fleetwood-McVie-McVie-Buckingham-Nicks lineup since 1987's TANGO IN THE NIGHT manages to recapture a good deal of the old feel, which had a lot to do with three very different singer-songwriters agreeing to live together under the umbrella of a single flexible rhythm section.

After dispensing with the group effort "The Chain," which leads off this set, the reconstituted Mac spends the rest of the album showing off its separate parts for the distinct elements they are, while mixing a few new songs into a collection of classics. Lindsey Buckingham rips through the late-period hit "Big Love" unaccompanied, compensating for his shrinking vocal range with some blistering guitar picking. Stevie Nicks stretches out "Rhiannon" like one of her flowing dresses, with a piano-ballad opening. Christine McVie, whose alluring, matronly rock voice remains undiminished, offers the lovely new "Temporary One," which, one hopes, doesn't describe this reunion.