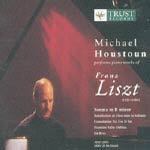 Renowned New Zealand pianist Michael Houstoun performs a solo piano recital of works by Franz Liszt. These recordings were featured in the New Zealand Television documentary Icon in b minor, which first aired in 1996. The romantic performer-composer Liszt is often considered to be the greatest pianist of his era. Liszt invented the public recital and career of travelling virtuoso. This album showcases a selection of his music that is poetic, virtuosic and at times ebbs to artistic repose.

Since 1981 Houstoun has been resident in New Zealand, where he performs primarily and regularly. He draws from a wide-ranging solo, concerto and chamber music repertoire.
Highlights of the past 10 years include performing and recording the 32 sonatas of Beethoven; a collaboration with Tainui Stephens on a television programme about Liszt ('Icon in B minor'); and performances with conductors Eduardo Mata, Neville Marriner, Franz Paul Decker and Alexander Lazarev.

In May 1999, Houstoun received an honorary doctorate in literature from Massey University.

Away from the piano, Houstoun enjoys cooking, reading, driving, gardening and playing golf.