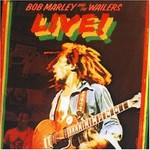 Bob Marley and the Wailers
Live!

One of the greatest "in concert" albums ever recorded, 'Live!' unfolds like a reggae greatest hits collection. Now a re-mastered reissue with bonus track.

'Live!' was recorded during a sold-out concert at London's Lyceum Theatre during the summer of 1975. One of the greatest "in concert" albums ever recorded, 'Live!' unfolds like a reggae greatest hits collection.

From the opening shuffles of "Trenchtown Rock" to the rabble rousing "Get Up Stand Up", this brief recording succinctly captures Marley's mesmerising combo. The rhythm team of Aston and Carlton Barrett are tight yet melodic while Marley's gently scouring voice weaves effortlessly with his backup vocalists creating a stunning mellow masterpiece.

Also included on this re-issue of 'Live!' is the excellent bonus track "Kinky Reggae", originally issued as the B-side of "No Woman, No Cry" (1975).

Trenchtown Rock
Burnin' & Lootin'
Them Belly Full (But We Hungry)
Lively Up Yourself
No Woman, No Cry
I Shot the Sheriff
Get Up, Stand Up

The Sermon on Exposition Boulevard

Bat Out of Hell