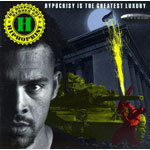 Disposable Heroes Of Hiphoprisy
Hypocrisy Is The Greatest Luxury

This album is an undisputable hip-hop classic from the early '90s - cerebral music for the soul that demands attention!

"The Disposable Heroes of Hiphopracy were based around two former members of the avant-garde jazz collective, The Beatnigs - namely Michael Franti and Rono Tse. First issued in the early '90s, "Hypocrisy Is The Greatest Luxury" featured inspired samples melded together with deep, jazzy vibes and plenty of oomph. It was, and still is, a tremendous album that will appeal to many, not just staunch hip-hop fans.

With their politically charged lyrics, these stylish revolutionaries were not unlike a modern day Gil Scott-Heron, but enhanced by a slightly industrial edge, a-la Tackhead.

This, their only album, contains many highlights, but the most memorable moments would have to include the opening cut "Satanic Reverses", "Famous and Dandy (Like Amos and Andy)", the rapid fire of "Television, the Drug of the Nation", the incredible title-track, and "Socio-Genetic Experiment".

Although he was later to go on to greater success with Spearhead and his own "solo" career, "Hypocrisy Is The Greatest Luxury" is still Michael Franti's most focused, and indeed, vehement work to date. It is a landmark recording that remains his pinnicle."
-MARTY and GEOFF (4 September 2004)

Black on Both Sides