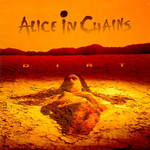 "In the early '90s a number of bands came to high prominence as they emerged from the burgeoning Seattle scene - thanks mainly to the now legendary music label, Sub Pop...

Far from being just another grunge band though, Alice in Chains were outstanding in their field. They purveyed a style more akin to '70s hard rock, ala Black Sabbath, than the punk or indie roots that most of their compatriots were reveling in. Certainly, Alice in Chain's well-penned, heavy songs were guitar / vocal driven, yet had a modern slant that demanded attention.

Whilst the group was in active service they produced three sterling studio albums all up plus some excellent, acoustic EPs & powerful live recordings. 'Dirt' (1992) was their sophomore release and is easily their most memorable effort. Every song is flawlessly crafted, showcasing the skills of all four band members within the 12 rock-solid compositions. 'Dirt' went platinum in its first year and had sold several million copies by the end of '93.

The fundamental sound of this band was always built around Jerry Cantrell & Layne Staley, who both double-up on guitar + vocal duties here, producing many classic hooks & melodies. Sean Kinney's pounding drums and the sturdy grooves of bassist Mike Starr (later replaced by Ozzy Osbourne's Mike Inez) hold the tunes together superbly; providing an unyielding foundation that is essential in this style of music.

The lyrics & general mood of 'Dirt' are dark in the extreme - to hear that Layne has since passed away from a Heroine overdose (he was an addict for years) is very sad, but comes as no real surprise. He was a most unique & uncompromising character, who had a natural musical talent that provided immense pleasure for the many fans of this classic band.

Standout tracks on 'Dirt' include the opener, "Them Bones", "Dam That River", the wicked "Sickman", "Rooster", the mournful "Down in a Hole", and of course the brilliant "Would?"

Them Bones
Dam That River
Rain When I Die
Down in a Hole
Sickman
Rooster
Junkhead
Dirt
God Smack
Hate to Feel
Angry Chair
Would?

Rage Against the Machine