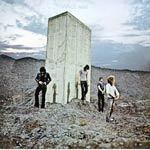 The Who
Who's Next

'Who's Next' is actually more than just a classic "rock" album - it is the definitive statement and crowning achievement from one of Britain's most distinguished and reputable rock bands.

"'Who's Next' is actually more than just a classic "rock" album - it is the definitive statement and crowning achievement from one of Britain's most distinguished and reputable rock bands.

Although originally planned as a more intricate, though sadly abandoned concept album (the fabled 'Lifehouse' project, which is covered in depth in the liner notes of this release), the songs on 'Who's Next' see Pete Townshend's songwriting at its most visceral and the lyrics are some of his most poignant.

The performances throughout this stunning collection of songs are perhaps the band's most even and indeed, powerful. The aforementioned Townshend blasts away with enthusiastic vigour, Roger Daltrey's singing is full bodied and emotive, and the rhythm section comprised of bass legend, John Entwistle (RIP), and the jovial maniac that was Keith Moon (RIP), is truly extraordinary!

This album also saw the clever use of early sequencers in such tracks as the introductory piece, "Baba O'Riley", and the crushing, "Won't Get Fooled Again". Other rocking moments include the Entwistle penned, "My Wife", "Bargain", the moving, "The Song is Over", and of course, the uplifting "Behind Blue Eyes", which captures perfectly the feel of when this album was originally released in the early '70s.

This definitively re-mastered edition of 'Who's Next' also includes a number of BONUS tracks, and extensive sleeve notes, which make for fascinating reading. And if that isn't enough for avid Who fans, it is recommended that you check out both the 'Classic Albums', and 'Live at the Royal Albert Hall' DVDs - both feature the 'Who's Next' album extensively."
-MARTY

"Along with 'Quadrophenia' (the original version from 1973), 'Who's Next' is the most essential of material released under The Who banner. Simply put, it is a perfect combination of a powerful group at their peak and songwriting mastery (courtesy of genius musician, Pete Townshend). The strength of the songs on 'Who's Next' is reflected in the band's set lists, ever since it was released in 1971. Want to hear what REAL rock music is? Play this album and you "Won't Get Fooled Again"!"
-GEOFF

Live at the Paramount