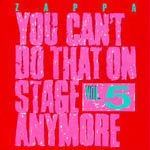 Frank Zappa
You Can't Do That On Stage Anymore Vol. 5

YCDTOSA Vol. 5 was released in 1992, with the first recorded appearance of 27 songs. On this one FZ granted the wishes of fans who wanted to hear more from the early bands.

Disc One is dedicated to live performances from 1965 to 1969, thus featuring various Mothers Of Invention line-ups (mostly the 1969 band). Lots of Lowell George (he's on 10 tracks) and lots of rare material, including the obscure R&B cover "Here Lies Love" and a bit of Mozart (a ballet excerpt featuring tap dancing by Jimi Hendrix Experience bassist Noel Redding).

Disc Two is the 1982 band (Steve Vai, Tommy Mars, Bobby Martin, Ray White, Ed Mann, Scott Thunes and Chad Wackerman), recorded that summer in Europe. Good extended versions of "Pound for a Brown on the Bus" and "City of Tiny Lights" here; plus a live version of the then-recent hit "Dancin' Fool."

Disc 2:
Easy Meat
Dead Girls Of London
Shall We Take Ourselves Seriously?
What's New In Baltimore?
Moggio
Dancin' Fool
RDNZL
Anvance Romance
City Of Time Lites
A Pound For A Brown (On The Bus)
Doreen
The Black Page #2
Geneva Farewell