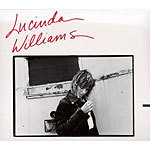 Deluxe American import 2CD re-issue. Featuring such stellar songs as "The Night's Too Long", "Passionate Kisses" and "Changed The Locks"

For years Lucinda Williams has been faced with Label executives and producers who wanted to shape her music into clean-cut, radio-friendly rock or country numbers.

Her releases have been few and far between, partly because she's had such a hard time finding a label whose demands don't get in the way of her music.

The self-titled 1998 album, which revived Williams' career and cemented her reputation, has been re-released and repackaged with six extra tracks plus an entire unreleased concert from 1989. Integrating traditional folk, country, and blues influences into a rock and roll format.

Featuring such stellar songs as "The Night's Too Long", "Passionate Kisses" and "Changed The Locks", marks a more rock-oriented direction for Williams.