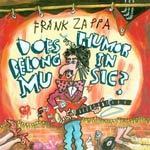 This live album of highlights from the 1984 tour was originally released in Europe only, and has now been made available here with a spiffy new Cal Schenkel cover replacing the crummy graphics of the import (for you hardcore collectors, the performances are totally different from the ones on the video of the same name).

The material is a good cross-section of FZ's sets at the time, opening with a majestic "Zoot Allures" and moving through the topical "Hot-Plate Heaven at the Green Hotel" (making its recorded debut); and the instrumental solo showpiece "Let's Move to Cleveland," plus a discreet bit of doggerel called "Cock-Suckers' Ball" that's appeared nowhere else (FZ learned this one off a bootleg tape by a '50s doo-wop outfit).

For the finale, there's an encore version of "Whippin' Post" featuring Dweezil on guitar. This was the last song from the last show of what Zappa intended to be his last tour, though he hit the road one more time in 1988.