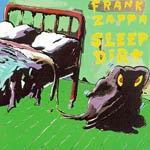 First released in 1979, one of three albums (with STUDIO TAN and ORCHESTRAL FAVORITES) made up of material originally intended for the unreleased box set LATHER. The box set would have completed his Warner Brothers' contract, but they let the albums trickle out separately with minimal packaging or promotion. (The superior LATHER set is now available)

Hence the original release was unauthorized by FZ and went out-of-print in a hurry; it's now here in fully Zappa-approved form. Material, recorded between 1974-1976, also includes some songs from the unstaged bizarre FZ science fiction musical HUNCHENTOOT (for which Zappa approached Barbra Streisand to star in!). Track highlights: "Regyptian Strut" and "The Ocean Is The Ultimate Solution."