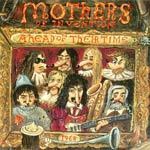 Frank Zappa and The Mothers of Invention
Ahead of Their Time

Digitally remastered. Ahead of their time? No kidding!

Ahead of their time? No kidding. Another archival release, from 1993, this documents the early Mothers Of Invention as they perform live, along with members of The BBC Symphony Orchestra, at London's Royal Festival Hall in October of 1968. FZ spent some time in court dodging archaic British obscenity laws as a result of these very shows, so listen with some respect.

Prologue
Progress?
Like It Or Not
The Jimmy Carl Black Philosophy Lesson
Holding The Group Back
Holiday In Berlin
The Rejected Mexican Pope Leaves The Stage
Undaunted, The Band Plays On
Agency Man
Epilogue
King Kong
Help, I'm A Rock
Transylvania Boogie
Pound For A Brown
Sleeping In A Jar
Let's Make The Water Turn Black
Harry, You're A Beast
The Orange County Lumber Truck (Part 1)
Oh No
The Orange County Lumber Truck (Part 2)