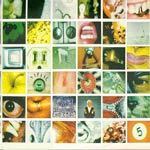 The fourth album by Seattle's golden boys gets its title from the fact that it doesn't have a barcode.

What it does have is 13 new songs that continue their tradition of fine hard rock for the nineties. The best songs, however, are the acoustic ones like "Off He Goes" and "Present Tense" where Eddie Vedder has a natural earthy tone to his voice as opposed to yelling his lungs out. His experience with Nusrat Fateh Ali Khan (they collaborated on the 'Dead Man Walking' Soundtrack) must have been the inspiration for a few of these songs, especially the wonderful "Around The Bend".

Neil Young's influence is rather evident, too. Hard working guitarist Stone Gossard sings on "Mankind" which adds to the good variey of sounds on 'No Code'. Included in the splendidly packaged cd are 9 polaroid postcards with lyrics to each song on the back.

Fanatics will need to buy 2 or 3 copies to get the whole set but casual Pearl Jam listeners will be happy enough with the music alone."
- GEOFF

Sometimes
Hail, Hail
Who You Are
In My Tree
Smile
Off He Goes
Habit
Red Mosquito
Lukin
Present Tense
Mankind
I'm Open
Around The Bend

Temple of the Dog