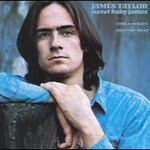 The triple platinum selling album from James Taylor, which includes superb songs such as "Country Road", "Sunny Skies" and his first Top 10 hit, the intensely personal "Fire and Rain."

'Sweet Baby James' is a triple platinum selling album from James Taylor, which includes superb songs such as "Country Road", "Sunny Skies" and his first Top 10 hit, the intensely personal "Fire and Rain."

Over the course of his long career, James Taylor has earned 40 gold, platinum and multi-platinum awards and five Grammy Awards for a catalog running from 1970's 'Sweet Baby James' to his Grammy Award-winning efforts 'Hourglass' (1997) and 'October Road' (2002). Taylor's first 'Greatest Hits' album earned him the RIAA's elite Diamond Award, given for sales in excess of 10 million units in the United States. For his accomplishments, James was honored with the 1998 Century Award, Billboard magazine's highest accolade, bestowed for distinguished creative achievement. The year 2000 saw his induction into both the Rock 'n' Roll Hall of Fame and the prestigious Songwriter's Hall of Fame. In February 2006, The National Academy of Recording Arts and Sciences selected James as its MUSICARES Person of the Year. In September 2008 James Taylor's 'One Man Band' (2007) was nominated for an Emmy Award for Outstanding Variety, Music or Comedy Special. His 'Covers' album (2008) is his own musical interpretation of tunes from the 50s, 60s and 70s and was nominated for two Grammy Awards.

He has sold some 40 million albums throughout his career, which began back in 1968 when he was signed to the Beatles' Apple Records. The album James Taylor was his first and only solo effort for Apple, which came a year after his first working experience with Danny Kortchmar and the band Flying Machine. It was only a matter of time before he would make his mark.

Above all, there are the songs: "Fire and Rain," "Country Road," "Something in The Way She Moves," "Mexico," "Shower The People," "Your Smiling Face," "Carolina In My Mind," "Sweet Baby James," "Don't Let Me Be Lonely Tonight," "You Can Close Your Eyes," "Walking Man," "Never Die Young," "Shed A Little Light," "Copperline" and many more. Taylor's songs have had a profound influence on both songwriters and music lovers of all generations and from all walks of life.

As a recording and touring artist, James set a precedent for solo singer/songwriters and blazed a path to which countless numbers of earnest young musicians have since aspired. His warm baritone is among the most recognized voices in popular music and his guitar playing has established its own standard.

James Taylor's music embodies the art of songwriting in its most fundamental form. He has been at it for decades: transforming introspective meditations into lyrics, melodies and harmonies that comfort and reassure the listener with the sense that these sometimes painful, sometimes celebratory moments are a part of life, shared by us all. In 1971, James was featured on the cover of TIME magazine, who heralded him as the harbinger of 'the singer/songwriter era". Today, the quintessential singer/songwriter has seen that era crossover into the 21st century.

My Head is an Animal
more suggestions…