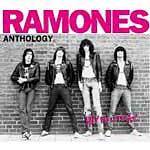 Sex Pistols the first punk rockas? Feggedaboudit! Punk is as American as the Ramones, formed in Forest Hills, New York, in 1974. They were on their third LP when the Pistols debuted.

Keying off their '60s U.S. pop and garage-band influences while sneering at the bloated state of '70s rock, Joey, Johnny, Dee Dee, and Tommy virtually invented the loud 'n' snotty punk style and 'tude, playing in Bowery dives like CBGB. The band scored a deal with Sire Records and soon conquered the world, but on their own terms. By their 2,263rd, and final, concert in August 1996, the Ramones had outsmarted and outlasted most of their critics-and inspired countless followers.

Blitzkrieg Bop
Beat On The Brat
Judy Is A Punk
I Wanna Be Your Boyfriend
53rd & 3rd
Now I Wanna Sniff Some Glue
Glad To See You Go
Gimme Gimme Shock Treatment
I Remember You
California Sun
Commando
Swallow My Pride
Carbona Not Glue
Pinhead
Sheena Is A Punk Rocker
Cretin Hop
Rockaway Beach
Here Today, Gone Tomorrow
Teenage Lobotomy
Surfin' Bird
I Don't Care
I Just Want To Have Something To Do
I Wanna Be Sedated
Don't Come Close
She's The One
Needles & Pins
Rock 'N' Roll High School
I Want You Around
Do You Remember Rock 'N' Roll Radio?
I Can't Make It On Time
Chinese Rock
I'm Affected
Danny Says
The KKK Took My Baby Away
She's A Sensation
It's Not My Place (In The 9 To 5 World)
We Want The Airwaves
Psycho Therapy
Howling At The Moon (Sha-La-La)
Mama's Boy
Daytime Dilemma (Dangers Of Love)
I'm Not Afraid Of Life
Too Tough To Die
Endless Vacation
My Brain Is Hanging Upside Down (Bonzo Goes To Bitburg)
Somebody Put Something In My Drink
Something To Believe In
I Don't Want To Live This Life (Anymore)
I Wanna Live
Garden Of Serenity
Merry Christmas (I Don't Want To Fight Tonight)
Pet Sematary
I Believe In Miracles
Tomorrow She Goes Away
Poison Heart
I Don't Wanna To Grow Up
She Talks To Rainbows
R.A.M.O.N.E.S.