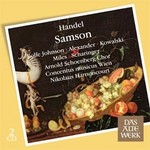 "One of the most popular of his oratorios in his lifetime-Handel revived it in no fewer than nine seasons between its premiere in 1743 and his death in 1759-Samson has remained a firm favourite: it was the natural choice for Covent Garden to stage for Handel anniversaries, with its mixture of the heroic epic and the personal drama, and is full of splendid music, ranging from profound pathos (for the blinded and disgraced Samson) to overt sensuality."

"One of the most popular of his oratorios in his lifetime-Handel revived it in no fewer than nine seasons between its premiere in 1743 and his death in 1759-Samson has remained a firm favourite: it was the natural choice for Covent Garden to stage for Handel anniversaries, with its mixture of the heroic epic and the personal drama, and is full of splendid music, ranging from profound pathos (for the blinded and disgraced Samson) to overt sensuality. A first-rate new recording was needed, but I am not sure that this is it. It has several points in its favour, the strongest of which is certainly the presence of Anthony Rolfe Johnson in the title-role. I have to say that I found the performance of what should be his most telling number, ''Total eclipse!'', oddly disappointing: he and Nikolaus Harnoncourt seem to sacrifice integrity of line to drama and effect, and the music isn't allowed to speak for itself. Then, incomprehensibly, his ''Why does the God of Israel sleep?'' is omitted, although it is a marvellous piece and essential to the dramatic structure. But for the rest he is in fine voice: rather sombre, almost baritonal in quality, in his opening air, ''Torments, alas!'', graceful yet powerful in ''Your charms to ruin led the way'', and shaping ''Thus when the sun'' exquisitely. The sound is always beautiful and the phrasing and moulding of the music is most sensitive and appealing. The other outstanding performance comes from Roberta Alexander, whose skilful deployment of her voice and subtle timing succeeds in conveying not only Dalila's sensual appeal (listen to the delicacy of her detail in ''With plaintive notes'' or those gently flicked phrases in ''To fleeting pleasures'') but also, with touches of harder tone, puts across her duplicity. Their duet, a splendidly vivid portrayal of a raging quarrel (note how the phrases overlap increasingly closely to represent their interrupting each other as the temperature rises), is a highpoint in the score, especially when performed with as much spirit as it is here.
Among the remainder of the cast, Alastair Miles has just the right virile swagger in his voice for the Philistine bully Harapha; the duet scene where the taunted Samson sends him packing is another high point. Jochen Kowalski's many admirers will no doubt enjoy his account of Micah's music, but I find his pared-down tone and austere treatment of the line alien to the music; it would have been better to find a woman for this role, as indeed Handel did. Anton Scharinger makes a weighty, full-toned Manoah but is nevertheless agile enough for the running semiquavers. The smaller roles are adequately done, though Blasi tends to use more than the ideal vibrato. Harnoncourt's choir lacks collectively the clarity and the sureness of attack of the best English ones, although heard individually the voices sound well enough. Several of the choruses in the early part of the work seem sluggish in rhythm and altogether low in vitality, but I have no complaints about their agility, for example in the fast section of ''To man God's universal law'' and there is no want of nobility in ''Hear Jacob's God'', though Harnoncourt's overdotted rhythms here seem misguided and ill-suited to the English words. The German inflexions (in one case French) to the words will sometimes trouble English listeners, though not generally in the choral music.

The chief difficulty I have with this set comes from Harnoncourt's rather mannered direction, for fiddling with Handel inevitably tends to undermine the grandeur of the music. There are numerous extra slurs in the orchestral parts, many of them of a kind more apt for the classical late eighteenth century than the baroque. There are a lot of heavy accents (listen to the thumps on the first beats in the orchestra in ''Thy glorious deeds'', for example) and numerous little swells and some romantic rallentandos. The performance was recorded in the Musikverein in Vienna, which gives a noisier, more resonant acoustic than is ideal, although there is no troublesome audience sound. Recitatives are taken rather slowly and deliberately. There are rather a lot of cuts, especially in the earlier part of the work. Well, it's a fine piece, and if it is just Samson and Dalila who interest you, this may be the set to have, but I think I would otherwise counsel waiting for something more at one with Handel's idiom."
(Gramophone)