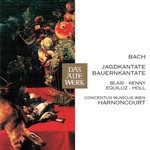 It is likely that Bach wrote the work, one of his best-know secular cantatas, in 1713, for the birthday of Duke Christian of Saxe-Weisenfels on February 23 of that year. At this point, Bach had been commissioned to stage a series of concerts at Weisenfels, and one of the works he composed especially was this, arguably his first "modern" cantata, to texts by Solomon Franck. According to Bach scholar Konrad Küscher, "courtly celebration always takes precedence over classical accuracy" in Bach's secular cantatas, "but the use of mythological names for the solo voices at least guarantees some slight dramatic action." In this allegorical setting, four solo voices are employed.

"Harnoncourt tops off the complete Teldec set of Bach's church cantatas with admirably ebullient accounts of [these two] secular cantatas…the exuberance of the performance carries over into Harnoncourt's accompaniments - no scholarly rectitude here - and the recording is first rate." Penguin Guide