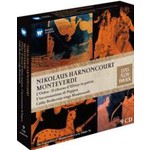 He conducts Brucker and Gershwin, Beethoven, Verdi and Johann Strauss - but at the beginning of his career Nikolaus Harnoncourt, one of the most renowned Maestros of our time, was a major pioneer of historical performance practice. With his ensemble Concentus Musicus Wien he reestablished the "Original Sound" into the Concert Hall of the 20th Century.

From 1968 to 1974 he rediscovered the "opera founder" Claudio Monteverdi, resulting in three studio recordings of his operas. Among the vocalists are Paul Esswood, Kurt Equiluz and Max van Egmond but also popular opera singers, such as Elisabeth Söderström, Helen Donath, and Sven-Olof Eliasson. These highly esteemed recordings are now re-released in a box set together with Harnoncourt's Monteverdi album of the legendary Cathy Berberian that has been unavailable for some years.

Featuring L'Orfeo, Il ritorno d'Ulisse in patria and L'incoronazione de Poppea plus the great scene Lamento d 'Arianna - the sole surviving fragment of an Ariadne opera of 1608 - the release is a complete edition of Monteverdi's dramatic works. These productions are still regarded as milestones that should not be labelled as "historical recordings" - after all they sound as fresh and sensual as ever!