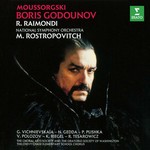 This recording of Boris Godunov, conducted by Mstislav Rostropovich, became the soundtrack of a film by Polish director Andrzej Żuławski. The star of both, charismatic Italian bass Ruggero Raimondi, praised Rostropovich's decision to use Mussorgsky's own version of the score by saying: "I always believe that genius expresses itself with simplicity." Rostropovich's wife, Galina Vishnevskaya sings the Polish princess Marina Mniszek, also providing a cameo as the Hostess. Paul Plishka, an American of Ukrainian heritage, is the solemn Pimen, while veteran tenor Nicola Gedda sings the Simpleton, leaving his erstwhile role of the Pretender (Grigoriy) to the impassioned Vyacheslav Polozov.

"It is an affectionate performance, appreciative of detail and responsive to nuance, though at times (surprisingly from so powerful an artist as Rostropovich) short on vehemence. At the work's centre are Boris and the chorus. The chorus is not all that sharply characterized at the start, as the many-headed monster groups and regroups, and suffers from a less than steadily coherent recording. In the great climaxes, notably in the Coronation scene, the sound becomes cluttered and ugly. Ruggero Raimondi's Boris is sung firmly and lyrically. He responds to the elegance to be found in Mussorgsky's brief, speech-inflected phrases, and some scenes, notably his final exchanges with his son, are movingly done." (Gramophone)