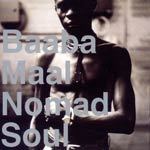 This album is a vast leap - melding Northern African, Celtic, pop, and a tinge of Cuban into a record of laughter and sorrow.

From Senengal and bigger than royalty there, Babba Maal has released three previous albums in the Afro-pop genre. This album is a vast leap though, melding Northern African, Celtic, pop, and a tinge of Cuban into a record of laughter and sorrow.

Dealing with topics from bigotry to unity and equality, Baba's work has always been highly political - consequently he's joined by some heavy weight friends in the shape of The Screaming Orphans (on the first track they round out the chorus admirably as they have done for Sinead O'Connor). Simon Emmerson (famed for his Afro Celt Sound System) produced the cd, assisted by Howie B, Brian Eno, Ron Aslan, Paul Smykle and Mykael Riley. S

imon Emmerson's touch is evident in the pop feel of world afro but Nomad Soul still conveys the feeling that you've not left the Ivory Coast. Serious at times and at others incredibly happy and uplifting, 'Nomad Soul' deserves a place on your world shelf alongside Ruben Gonzales and the like - fill up that shelf!