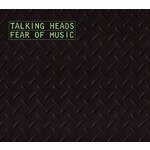 A pivotal musical statement in the career of this highly respected quartet, with production and additional instrumental courtesy of Brian Eno. Essential Heads!

David Byrne, Chris Frantz, and Tina Weymouth formed Talking Heads in the early 1970s. Jerry Harrison, formerly of The Modern Lovers, joined in 1976 and Talking Heads quickly became one of the most important bands to emerge from the New York punk scene.

Over the course of their 11-year recording career they released ten albums to critical raves, and racked up more than a few hits.

"Originally released in 1979 - with production and additional instrumental courtesy of the genius musician, Brian Eno - 'Fear of Music' is an essential Talking Heads album!

Continuing on from their inspired sophomore recording, 'More Songs About Buildings and Food', The Heads took things a giant step further, honing their songwriting skills and incorporating "world" rhythms into the mix. This is immediately apparent on the opening piece "I Zimbra" - featuring Robert Fripp on guitar - with its infectious beats and chanting vocals.

Other highlights include the group-penned "Life During Wartime" (which took on a life of it's own on the stunning live album / film 'Stop Making Sense' a few years later) and direct, simplistic cuts such as "Mind", "Air" and "Drugs". However, the most outstanding songs would have to be the powerful "Memories Can't Wait" (later covered by Living Colour) & "Heaven", with its dreamy instrumentation and thought provoking lyrics.

Whilst there are many Talking Heads albums that could be described as "classic" (the stark '77 debut, the astonishing 4th release 'Remain In Light', the popular 'Speaking In Tongues', and the afore-mentioned 'Stop Making Sense'), this recording is definitely a great place to start.

'Fear of Music' was a pivotal musical statement in the career of this highly respected quartet. It also lay the groundwork for the equally brilliant David Byrne / Brian Eno collaboration 'My Life in the Bush of Ghosts', which followed in 1981."
- GEOFF (18 September 2004)

More Songs About Buildings and Food