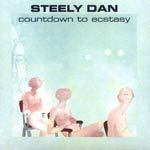 Now renowned more as studio-based boffins, following the release of their first album, Can't Buy A Thrill, in 1973 the newly-minted Steely Dan found themselves forced to tour. This forced them to create the follow-up on the hoof. While the band expressed a certain disappointment with the results (and certainly the commercial gains fell way short of the predecessor), Countdown... remains a jewel in their very large artistic crown. A more jazzy affair than Can't buy..., the album built on the duo of Walter Becker and Donald Fagen's ability to combine cynicism with wit, intelligence and some great hooks, all bolstered by the best players around. Still composed of a core of Jim Hodder (drums), Jeff 'Skunk' Baxter (lead guitar) and Denny Dias (rhythm guitar), the duo demoted David Palmer to backing vocals and handed the mic to Donald for perpetuity. It was a wise move.

These tales of drug abuse ("Boston Rag"), class envy ("Your Gold Teeth"), and post-nuclear devastation ("King Of The World") needed the distinctive, weary tones of Fagen to propel them. While opener, "Bodhisattva" may have been a live staple designed for soloing, the band's chops were now fearsome enough to elevate it beyond mere jamming. What's more in "Pearl Of The Quarter" the pair showed that with little more than nuance they could paint a rich picture indeed (it's the tale of a midddle class boy chasing forbidden fruit).

Add to this the usual array of talent drafted in to fill any gaps ie; Rick Derringer's fearsome slide on "Showbiz Kids". With the latter the Dan also forged their fearsome reputation as social commentators as they finally turned their gaze towards the excesses of the West Coast, while reserving no mercy for even themselves ('they got the Steely Dan t-shirts').

Post-modern before the term was coined, erudite, musically literate and still unbelievably cool; Steely Dan by this point were setting a benchmark that few have ever matched.
BBC.

Chemtrails Over The Country Club