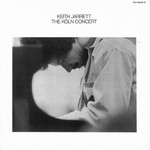 "Jarrett's message from the keyboard took off from the small enclave of an informed and dedicated minority audience, and reached the huge worldwide constituency of listeners. His albums would turn up in the collections of people who would otherwise cross the street to avoid buying a jazz record. From the mid-70s on, his concerts began to resemble religious rituals, attended by flocks of devotees for whom his music had a meditative, spiritual and transformative power. And all this stemmed from the recording of a single album - conceived as a live concert by a sleep-deprived Jarrett on a faulty grand piano - made in Köln, Germany, on 24 January 1975. Sales of The Köln Concert, on Munich's fledgling new-music label, ECM, broke records of all kinds. It remains the bestselling solo album in jazz, and the bestselling solo piano album in any genre.

From the glistening, patiently developed opening melody, through sustained passages of roaring riffs and folksy, country-song exuberance, the pianist is utterly inside his ongoing vision of the performance's developing shape - a fusion of the freshness of an improvisation with the symmetries of a composition that's central to the album's communicative power. Harmonically and melodically, it wasn't a particularly "jazzy" record by the piano-jazz standards of that time, which might also have eased its progress across the sectarian divides of jazz, pop or classical tastes. There had been, however, an earlier clue to the possibilities of this journey into the largely uncharted waters of improvised solo-piano performance. The great pianist Bill Evans, one of the young Jarrett's jazz models and an artist similarly steeped in classical music, had recorded the meditative solo improvisation Peace Piece 16 years before, and built it around a simple two-chord vamp in which the harmonies stretched increasingly abstractly as the performance progressed. Much of Jarrett's playing on The Köln Concert similarly developed around repeating hook-like motifs, instead of unfolding over song-structure chord sequences as most bop-based jazz solos did.

Jarrett's improvisation was also hypnotically rhythmic, bordering on mantra-like. He was unafraid to locate a compelling idea and stick with it, building intensity on a single rhythmic notion in a manner that still sounds urgently contemporary. A pop-like deployment of repetition, and a reassuringly anchored sense of tonal consistency - the latter occasioned by the pianist's hugging of the acceptable middle-register of an otherwise tinny piano he had almost cancelled the gig to avoid - contributed to the music's astonishingly organic feel.

Jarrett's desire to make a solo-piano album had led to his earlier departure from Columbia Records, and to his relationship with the compatible Manfred Eicher of ECM (with whom he was travelling around Europe, jammed into a Renault 5, on the tour that included Köln), a visionary producer who heard new music in the same eclectic way. Though he was only 29 at the time of The Köln Concert, Jarrett had already had a brief flirtation with electronics in Miles Davis's fusion band (declaring afterwards that he wouldn't touch a plugged keyboard again) and rich regular-jazz and early-fusion experiences in the popular bands of saxophonist Charles Lloyd and drummer Art Blakey. He had also made some compositionally distinctive and now highly regarded postbop recordings of his own, in the legendary early-70s "American quartet" with saxophonist Dewey Redman, bassist Charlie Haden and drummer Paul Motian." - John Fordham, The Guardian