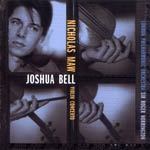 "A beautiful new violin concerto played with passion and commitment by Joshua Bell for whom it was written. A violin concerto for all who love the violin and its music"
Recording of the Month - Gramophone Magazine (Jan 2000)

British composer Nicholas Maw (b.1935) is one of the leading composers of his generation and a pivotal figure in the Neo-Romantic Revival; his influences include Brahms, Bruckner and Strauss. This is the world premiere recording of his violin concerto, which was commissioned especially for Joshua Bell, and was first performed in 1993.

The poetic musicality of Joshua Bell has earned the American-born violinist a prominent position among the leading musicians of the world. His career began when he was barely in his teens but he is already one of the most promising violinists of his generation. Today, at age 32, Bell has earned a reputation not only as a dynamic performer but as a dedicated and thoughtful musician who has successfully bridged the gap from child prodigy to inspired and mature artist.