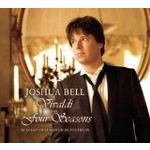 "This music is so familiar and its technical demands so mainstream these days that any of today's better-trained violinists could deliver a respectable rendition--of any Vivaldi concerto for that matter. But Bell's assured performances and exceptionally vibrant sonics move this recording into the top tier--and I'm already eying my shelf to see which current occupant will have to be sacrificed."
(ClassicsToday 10 performance / 10 sound)

Vivaldi's set of four Concertos known as "The Four Season" is the quintessential piece of classical music for anyone's collection. Recorded by Grammy Award-winning violinist Joshua Bell with the celebrated musicians Academy of St Martin In The Fields. It is coupled with another masterpiece of Baroque virtuosity, Giuseppe Tartini's The Devil's Trill.

"Joshua Bell and the Academy of St. Martin in the Fields have joined forces and created an absolutely marvelous listening experience with their latest recording released in September 2008. Joshua Bell, one of the world's most celebrated violinists, takes his virtuosic talents to a level I've never encountered. He makes the violin do things I never thought was possible. Throughout the album, prepare to be amazed and astonished. And even though there is now yet another recording of Vivaldi's Four Seasons, this may be the one Four Seasons to rule them all."
(About.com *****)

Violin Concerto No.3 in B minor & other French works (Incls Massenet - Meditation from 'Thais')