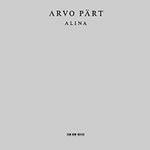 "Vladimir Spivakov, particularly, is breathtaking in his two performances of Spiegel im Spiegel, his control of tone and carefully considered use of vibrato adding greatly to the poignancy of the music." BBC Music

There have been other recordings of "Für Alina" and "Spiegel im Spiegel" but none like those on this disc, realized with the participation of the composer. Here Pärt, aided by exceptional interpreters, revisits those seminally important compositions which marked the birth of a new, "prismatic" period in his work, establishing a link between compositions embodying the fundamental traits of the of the "tintinnabuli style." Three interpretations of the duet 'Spiegel im Spiegel' (Mirror in the Mirror), for violin or cello and piano, become "formal pillars positioned before, between and after two solo renderings of 'Für Alina'", the latter performed with interpretive freedom by Alexander Malter.

I could compare my music to white light
which contains all colours. Only a prism can divide the colours and make them appear; this prism could be the spirit of the listener.
- Arvo Pärt

A "prismatic" approach to musical construction in Arvo Pärt's work was heralded by the writing of "Für Alina" in 1976, a piece for solo piano which announced - quietly, thoughtfully - the arrival of his "tintinnabuli style". Written originally as a gift for a young Estonian girl on her own in London, the work's modest means give little hint of the soul-searching that preceded its composition. With "Für Alina", Pärt has often said since, he began to find his voice as a composer: "This was the first piece that was on a new plateau. It was here that I discovered the triad series, which I made my simple little guiding rule." Abandoned, with this new beginning, were the experiments with serialism that had marked his work of the 1960s. Composition, for Pärt, had become a process of self-discovery, and his first requirement was clarity. As writer/pianist Susan Bradshaw, one of his earliest Western supporters, put it: "He seems to be trying to avoid any hint of complication for complication's sake; eschewing musical verbosity above all, he believes that anything that has no properly audible - as opposed to merely textural or cerebral - purpose has no place in his work."

For the recording of this New Series album Pärt - with producer Manfred Eicher, and four exceptional interpreters - returned to the Estonian composer's epochal, profoundly influential yet resolutely unsensational music of the late 70s. Hermann Conen takes up the story in the CD liner notes: "It is to this period of new departures, to the magic of these new beginnings that the present recording hearkens back, and it does so through transformation. Pärt establishes a link between two works embodying, on a higher level, the fundamental traits of the tintinnabuli style - creating music by concentrating on an indispensable core of material. Now three interpretations of the duet 'Spiegel im Spiegel', written in 1978, become formal pillars positioned before, between and after the two solo renderings of 'Für Alina.'"

In its original form, "Für Alina" is barely two minutes in length, yet the marking in the score "Calm, exalted, listening to one's inner self" encourages a treatment that takes a more liberal approach to duration. In the presence of the composer, pianist Alexander Malter established a certain approach through variation, repeating the form, painstakingly adjusting phrasing and dynamics in the search for the truest - or most literal - realisation of "tintinnabuli" sound. The piano sound is bell-like, pellucid, almost crystalline, in the extended arcs of variation that Pärt has chosen for this CD.

"Spiegel im Spiegel" has been a much played Pärt piece over the years, recorded also on several occasions. It is good to have, at last, interpretations featuring the work's dedicatee, Vladimir Spivakov. Readings of "Spiegel im Spiegel" with Spivakov and Sergey Bezrodny open and close the disc. The version of "Spiegel and Spiegel" for cello and piano is played by Dietmar Schwalke with Alexander Malter and set at the centre of the album. Thus the programme itself is symmetrical; a mirror in a mirror, reflecting upon itself.

Herman Conen: "Since 'Für Alina', Pärt's scores have been irradiated with the white light of the pure triad. But here, in this journey to the origins of the style, to perhaps its purest form, its meaning is illuminated in a special way. A system of mirror reflections serves to present the same thing in an ever new light and in its abundance of colours. From this perspective, 'Spiegel im Spiegel' is not merely a link in a formal series but itself functions as a musical prism, enabling the colours of 'Für Alina' to emerge and shine forth."

Violinst Vladimir Spivakov was born in Ufa, Russia, and studied at the Moscow Conservatory with Yuri Yankelevitch, receiving also encouragement and advice from David Oistrakh. He has had a distinguished career as both violinist and conductor. A recipient of Russia's highest prize, the National Cultural Heritage Award, Spivakov has received many honours for his work, beginning with prizes at the Long-Thibaud Competition in Paris, the Paganini Competition in Genova, the Tchaikovsky in Moscow, etc. A highly-acclaimed 1975 solo debut with the New York Philharmonic announced his arrival in the West. Since then he has appeared with the world's leading symphonic orchestras under conductors including Abbado, Giulini, Solti, Bernstein, Ozawa, Maazel, Temirkanov, and many others. A prolific recording artist, he is also director of the Colmar International Festival in France, as well as founder, artistic director, conductor and principal violin soloist of the Moscow Virtuosi.

Pianist Sergej Bezrodny was born into a musical family in Moscow and studied piano with Professor Evgueni-Melini at the Tchaikovsky Conservatory. He was the harpsichord player with the Moscow Chamber Orchestra under Rudolf Barshai, before joining Spivakov's Moscow Virtuosi in 1982. Since then he has partnered Spivakov in numerous chamber music concerts and recitals and also made many recordings, of which the 1995 "Meditation" with Spivakov is perhaps the best-known. Bezrodny's repertoire is broad, and ranges from Tchaikovsky and Schnittke to Turina, Mahler and much more.

Pianist Alexander Malter was born in Moscow. During his student years with Tatjana Nikolajewa and Oxana Jablonskaja at the Tchaikovsky Conservatory his piano playing already gave evidence of the "beauty of sound, based on great musicality and individual warmth of tone" later praised by Arvo Pärt. After graduating in 1969 he intensified his concert activities as piano soloist, accompanist and chamber musician. By the mid-1980s, the concert engagements from the West were also numerous, and in 1991 Malter moved to Germany; he continues to be a much sought-after player. His particular strengths include - alongside the works of countrymen Tchaikovsky, Skryabin, and Rachmaninov - also Bach, Haydn, Schubert, Mendelssohn, Chopin and Liszt, as well as contemporary music. With Christian Stadelmann and Dietmar Schwalke, he plays in the Vincent Trio.

Cellist Dietmar Schwalke has been a member of the Berlin Philharmonic Orchestra since 1994. Born in Pinneburg, near Hamburg, he began playing violoncello at the age of 12, and studied with Arthur Troester in Hamburg and Wolfgang Boettcher in Berlin. He made his solo debut in 1981 playing Robert Schumann's cello concerto with the Radio-Symphonie-Orchester Berlin (latterly the Deutsches Symphonie-Orchester), and has recorded music of Brahms and Beethoven with pianist Jonathan Alder. For six years Dietmar Schwalke was a member of the Kreuzberger String Quartet. Concurrently with his Berlin Philharmonic duties he plays in diverse chamber music settings with, amongst others, the Metropolis Ensemble and the Philharmonische Streichersolisten. He also teaches cello and chamber music at Berlin's Hochschule der Künste.