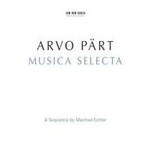 Composer Arvo Pärt and producer Manfred Eicher have maintained their creative partnership for more than 30 years. Eicher launched ECM New Series in 1984 as a platform for Pärt's music, bringing the Estonian composer to the world's attention with 'Tabula Rasa'. Since that epochal release, all first recordings of Pärt's major works have been made for ECM, with the composer's committed participation.

As for the performers, documentation of Pärt on ECM started with the recording of Fratres with Gidon Kremer and Keith Jarrett joining forces for the only time and has expanded to embrace many musicians who have, in turn, become closely associated with Pärt's music. These have included the Hilliard Ensemble, the British vocal group whose pure approach to early music was to prove eminently adaptable to Pärt's timeless oeuvre.

"My contact with ECM is beyond categorization," Arvo Pärt has said. "It is a natural supplement to my composing. Manfred Eicher's instrument is sound, acoustics, the sounding space which can be heard only by him. He hears in a special way and his records are a result of this hearing. What I call a piece of art made by Manfred is actually a rich and sensitive complex of hearing, thinking, feeling, taste and artistic skill, a whole philosophy. It is also something very lively and in continuous formation. Our work together making new records is always a celebration."

"Pärt's moving lament for the living brings from him rarely heard power. It's not often that you can connect so directly with the inspiration behind a new composition, but Arvo Pärt's Da pacem Domine was brought about by an encounter with Anish Kapoor's colossal sculpture Marsyas, exhibited at Tate Modern. It was an extraordinary piece and Pärt's response is truly arresting." Gramophone Magazine on Da pacem Domine

"The 'original' performers Gidon Kremer and Keith Jarrett remain unsurpassed in the violin/piano version of Fratres. Whether you notice it or not, it's the architecture of the pieces that make them powerful and those artists have the measure of it." Classic FM Magazine on Fratres

"Wallfahrtslied (1984, 'Song of Pilgrimage'), a memorial to a friend, is presented in the revised version for strings and men's choir. Again Pärt engages a lyrical muse, particularly for the emotionally weighted prelude and postlude whereas the accompaniment to the main text (Psalm 121, 'I lift up mine eyes unto the hills…'), a combination of pizzicato and shudderingbowed phrases, suggests a lament tinged with anger." (Gramophone on Pilgrim's Song)

"It's one of the most captivating performances of the work that I've heard, with singing of the highest polish - the Latvian Radio Choir and the Sinfonietta Riga achieve a fastidious balance, with every last detail ringing out." International Record Review on Alleluis-Tropus