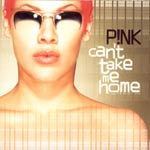 Newcomer P!nk offers a serious shot of adrenaline to pop!

No rookie in the music business, Pink had already had careers both as a dancer and background singer before forming a group of her own. Packed with cutting-edge R&B and pop, her debut album boasts seven songs co-written by this appealing and talented young woman.

On her first album release, Pink pulls out all the stops, working with writers and producers including Babyface on "Split Personality," She'kspere on the blazing hot "Hell Wit Ya," and Soulshock & Karlin on "Private Show." Other standout cuts included here are "Do What U Do," "Most Girls," and "You Make Me Sick." With a sheen that can be attributed to Pink's previous years of showbiz experience, Can't Take Me Home is an accomplished album for a debut release.