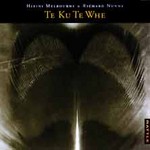 This passionate and spiritual album is the definitive recording of pre-European Maori instrumental music. 'Te Ku Te Whe' has a rich and sensual musicality, which spans both its traditional ethnic source and the modern context of the performers.

Hirini Melbourne and Richard Nunns make highly innovative use of traditional Maori instruments, many of which are unknown even in Aotearoa. Purerehua, koauaua, nose flute, and bull-roarer are among the many musical taonga (treasures) enjoying a renaissance, thanks to these two artists.

The album has a rich and sensual musicality, which spans both its traditional ethnic source and the modern context of the performers.

Literally meaning "The Woven Mat of Sound", 'Te Ku Te Whe' presents new compositions performed only on the traditional instruments of Maori, producing a passionate and spiritual album. Over a period of 25 years the instruments have been found in museums, on marae, and recovered from the memories of old people.

In keeping with Maori spirituality the music on 'Te Ku Te Whe' takes the listener into an ancient world, structured by mythology, history, and the moods of nature. The sound and images have been chosen to evoke the closeness of Maori music to the land, the sea and the wind.

" 'Te Ku Te Whe' is a wonderful testimony to the dedication... brought to the lost voices of the Maori world - an outstanding success for all those involved."
- Charles Royal (Music in NZ)

The Curse of the Queen's Diamond