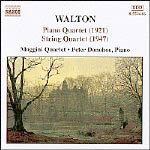 Born into a musical family in a small industrial town that had little musical background, William Walton was to become one of the most famous British composers of the 20th century. With colourful scores, including two symphonies and concertos for both the violin and cello, his music now forms part of the essential orchestral repertoire. Yet for such a famous composer he wrote very little, his catalogue of chamber music containing just eight works. The Piano Quartet of 1921 is a very early score, full of youthful exuberance and vigour, and is in marked contrast with the emotional intensity and wistful lyricism of the String Quartet completed by Walton twenty-six years later.

"William Walton produced rather little chamber music, but here are two fine examples. The D minor Piano Quartet (1921) is a sturdily inventive if ultimately derivative work, prophetic of his mature style in the splenetic rhythms of its scherzo and finale, but with uncharacteristic leanings both to French harmony and the English-mystical tradition. This reading has a keenness and gusto, however, that are very persuasive. The string quartet, the composer's second, is a masterpiece. Completed in 1947, it inhabits the same world of melancholy and rhythmic toughness as the First Symphony, and attests to the same knack of infusing extremely solid craftsmanship with extremely vivid life. This beautiful performance brings out particularly well that 'northern' wistfulness, dominant in the lento, that is uniquely Walton's."
- The Sunday Times (Paul Driver), June 11, 2000

"Walton is hardly known as a composer of chamber works, yet here are two examples of his mastery of the smaller scale. The Piano Quartet from 1921 pays its dues to Ravel, and is very much the work of a passionate young composer, while the A minor Quartet of 1947 reflects more troubled times. An excellent release with strong performances."
- The Independent (Andrew Clark), June 10, 2000

"This disc of chamber music provides a splendid follow-up to the fine orchestral recordings already included in Naxos's Walton series. The young players of the Maggini Quartet—who earlier recorded Britten, Elgar and Moeran for Naxos—give refined and powerful performances of both works. The opening of the 1947 String Quartet is presented in hushed intimacy, making the contrast all the greater when Walton's richly lyrical writing emerges in full power. There is a tender, wistful quality here, which culminates in a rapt, intense account of the slow movement, where the world of late Beethoven comes much closer than most interpreters have appreciated. The poignancy of these two movements is then set against the clean bite of the second movement Scherzo and the brief hectic finale, with their clear and transparent textures. This is a fine a version as any—and like other in the series a splendid bargain, beautifully recorded.

"With Peter Donohoe a powerful and incisive presence, and the Maggini Quartet again playing most persuasively, the early Piano quartet—an astonishing achievement for a teenage composer—is also given a performance of high contrasts, enhanced by a refined recording which conveys genuine pianissimos that are free from highlighting. If, in the first three movements, the pentatonic writing gives little idea of the mature Walton to come, some characteristic rhythmic and other devices are already apparent. Even the penatonicry suggests that the boy had been looking at the Howells Piano Quartet rather than any Vaughan Williams. It is in the finale that one gets the strongest Waltonian flavour in vigorously purposeful argument, though there the echoes are different, and Stravinsky's Petrushka is an obvious influence."
- Gramophone (Edward Greenfield), July, 2000