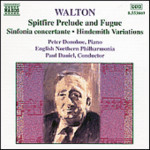 William Walton occupies his own position in English music of the twentieth century, chronologically between the generation of Gustav Hoist and Vaughan Williams and that of Benjamin Britten.

Born in Oldham in 1902, the son of a local singing teacher and choirmaster, he became a chorister at Christ Church, Oxford, and followed this with admission to the university at the early age of sixteen, with support from the college. His Oxford career brought success in music but failure in the necessary academic tests to allow him a degree. At the same time his friendship with Sacheverell Sitwell led to his adoption by the three Sitwell children, Osbert, Edith and Sacheverell, as an honorary brother. The practical help of the Sitwells and the musical and cultural influences of their circle allowed him to devote his attention to composition in the years after he left Oxford, followed by increasing independence, as he won a wider reputation for himself and a satisfactory income from music for the cinema and from a generous bequest by Mrs. Samuel Courtauld. In the years after 1945 he was to some extent eclipsed by Britten, whose facility he lacked and whose contemporary achievement now seemed to go beyond Walton's successes of the 1930s. His marriage in 1948 to Susana Gil Passo, whom he had met in Buenos Aires at a conference of the Performing Rights Society, was followed by a move to the island of lschia in the Bay of Naples, continuing an association with Italy that had started in the early days of his friendship with the Sitwells and continued in subsequent years. He died there in March 1983.

In the years between the wars Walton won a succès de scandale with Façade, a collaboration with Edith Sitwell that amused the cognoscenti and shocked wider audiences, before winning an assured if minor position in twentieth century repertoire in its final form, whether as a ballet or in the concert-hall. His dramatic oratorio Belshazzar's Feast, with a text derived by Osbert Sitwell from the Bible, first performed at the Leeds Festival in 1931, was a significant addition to choral repertoire, while the Viola Concerto of 1929 marks a height of lyrical achievement and holds a central place in the viola concerto repertoire. The first of his two symphonies was eventually completed in 1935 and his Violin Concerto in 1939. The popular film music of the war years was followed after the war by the operas Troilus and Cressida and the one-act Tchekov extravaganza, The Bear, as well as the Hindemith Variations, Improvisations on an Impromptu by Benjamin Britten and the Cello Concerto and Second Symphony.

The Three Elizabeths (music from the times of the Three Queens)