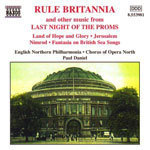 Christian Sinding was born in 1856 in Kongsberg, Norway, where his father was an engineer. His mother was artistically minded, encouraging her three sons' artistic interests and both Christian's brothers pursued artistic careers

Leeds Festival Chorus was founded in 1858 to sing at the first Leeds Music Festival. The festival owed much of its international reputation to the quality of the chorus and the new works commissioned from composers such as Dvo&#345;ák, Elgar, Holst and Vaughan Williams. Many distinguished conductors have worked with the chorus, including Sullivan, Beecham, Giulini, Horenstein, Karl Richter, Pierre Boulez, Charles Mackerras, Colin Davis, John Eliot Gardiner, Roger Norrington and Mark Elder, but it was Malcolm Sargent who conducted the première of what is perhaps the Festival's most famous commission, Walton's Belshazzar's Feast. The chorus now numbers about 160 singers and continues to sing in Leeds Town Hall with a variety of conductors. It also makes frequent visits to the Bridgewater Hall in Manchester and broadcasts and records frequently. Its chorus master Simon Wright is one of the country's most distinguished choral trainers and among its regular conductors.