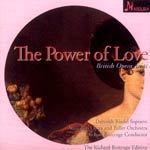 A beautiful recording of neglected British Opera arias...
"Obviously this album is a work of great love and every attempt has been to do it right."

"Obviously this album is a work of great love and every attempt has been to do it right."

"This little record has been in my mind for many years. During my student days in London in the '50s, I collected many nineteenth century programmes, many piano scores and hordes of songs from popular operas with their illustrated music covers, so that the operas of Balfe and Wallace have long been familiar friends. Many of these operas were exceedingly popular in the nineteenth century and were sung by very famous singers. Changing taste and new works have pushed these old warhorses into the background, so that today they are little more than a curiosity. But they were once the popular music of the day.

"Trying to find complete orchestral scores and parts proved to be somewhat of a headache, but I am fortunate to have good friends who helped me. Most of the orchestrations are original. I thank Courtney Kenny, the Sir Arthur Sullivan Society of Great Britain, the Balfe archive and the Carl Rosa Trust for generously lending me scores and parts from their archives.

"Thanks also to Brian Castles-Onion for his splendid recreation of the 'Night Winds' from Wallace's Lurline. The library in Brussels that houses the full score was closed for several months and the Carl Rosa parts were incomplete.

"I am also grateful to Richard Burgess-Ellis for reconstructing the aria from Amber Witch as well as the Waltz from Faraday's Amasis for both of which I found no score or parts. He provided invaluable assistance and was responsible for magically producing eminently readable scores and parts from very old and fairly illegible manuscripts."
British Opera Arias: An introduction by Richard Bonynge.

Wallace: Lurline "The Night Winds"
Balfe: Il Talismano "Che Calmo Asil"
Wallace: Maritana "'Tis the Harp in the Air"
Balfe: The Seige of Rochelle "'Twas in that garden Beautiful"
Balfe: Il Talismano "Nella Dolce Trepidanza"
Sullivan: Ivanhoe "Lord of Our Chosen Race"
Sullivan: The Rose of Persia "'Neath my Lattice"
Wallace: Maritana "Scenes that are Brightest"
Faraday: Amasis "Little Princess, Look Up!"
Balfe: The Rose of Castille "The Covent Cell"
Balfe: Satanella "There's a Power Whose Sway"
Balfe: The Maid of Artois "The Rapture Dwelling in my Heart"
Balfe: The Maid of Artois "Yon Moon o'er the Mountains"
Balfe: Satanella "Oh! Could I but his Heart Enslave"
Balfe: The Puritan's Daughter "Bliss for ever Past"
Wallace: Lurline "The Naiad's Spell"
Wallace: Love's Triumph "These Withered Flowers"
Wallace: The Amber Witch "My Long hair is Braided"

Gilbert & Sullivan: The Sorcerer (Rec 1953) plus highlights from the 1933 recording
more suggestions…