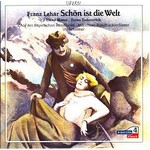 ""Recycling” was probably not a word in use during the early decades of the 20th century but with hindsight Franz Lehár might well merit the soubriquet "recycler”. Not even his early – and greatest – success The Merry Widow was free from self-borrowing. The Vilja Song was originally written for Der Göttergatte. The Land of Smiles (1929), as is well known, was a re-worked version of the 1923 operetta Die gelbe Jacke. The year after success with Land of Smiles he came up with Schön ist die Welt (The World is Beautiful) which was basically a rearrangement of Endlich allein from 1914.

The present recording is musically complete but there is no spoken dialogue, which may be a blessing in the long run. The downside is that, with no linking dialogue at all, one gets the feeling of a highlights disc rather than a piece of musical theatre. Many other operetta recordings have been presented with heavily foreshortened spoken parts just enough to give a hint of the action and establish unity. Stefan Frey in his booklet notes points to Lehár's wide musical tastes and also his ambitions to widen the scope of the operetta genre. As early as 1910 he wrote Zigeunerliebe (see review) where there are very few separate arias. Instead he composed long scenes where there was sometimes room for aria look-alike outbursts. In Schön ist die Welt the second act consists of an opening scene with almost 15 minutes of continuous music and a final scene of the same proportions. Between these there is a sole tenor "hit” song and a – to me – unknown quantity of dialogue. Lehár's "Wagnerian act” it has been called. Even though the Wagner echoes are mostly on the surface it is of some interest to note his attempts to break loose from what he obviously regarded as the strait-jacket of operetta convention. The setting is "a rocky plateau in the Alps” and with a chromatic prelude evoking the outdoor atmosphere we are indeed transported to the world of late-romantic opera. The action is carried on in a recitativic dialogue with an active orchestra, colourful instrumentation and the title song Schön ist die Welt functioning as a Leitmotif. This is also the case with the final scene of the act. The outer acts are more conventionally operetta-ish, the novelty being his use of popular dances: waltz of course, but also tango. In the last act the secondary couple dance the brand new rumba (track 16).

"The action is set in the highest of high circles and on the highest of high mountains. It is simple, gripping and stirring”. This verdict comes from the pen of no less an expert than Alfred Einstein. The story revolves around Crown Prince Georg and Princess Elisabeth von und zu Lichtenberg who, to quote the booklet text "are not mutually acquainted and do not want to become mutually acquainted because others have decided that they will make a perfect match but who promptly fall in love when they do it their own way”. This falling in love occurs when the Crown Prince, disguised as a mountain guide, brings Elisabeth to the Alps in act 2, where they have to spend the night because an avalanche has blocked the way. An avalanche may seem like a novelty on the stage but almost forty years before Schön ist die Welt, another avalanche kills the lovers in the final scene of Catalani's La Wally. Lehár's avalanche brings more positive results.

When reviewing the Naxos reissue of Ackermann's The Land of Smiles I drew parallels with Puccini's Turandot. Even though Puccini is harmonically bolder Lehár's orchestration is similarly colourful and among the many scores found in Lehár's study were many of Puccini's works. The overture to Schön ist die Welt may point to a reverse influence, that of Korngold learning from Lehár. This mighty music has a distinct Hollywood flavour. Lehár wished to be able to use film projection in his operetta. Operetta lovers who want nice hummable tunes will have their fill. There is a beautiful duet (track 5), the title song (track 6), a fine tango (track 8) and the second act tenor aria (track 11). The whole third act is a veritable string of pearls of traditional operetta hits after the Wagnerian Alpine excursion, including the coloratura aria Bin verliebt, bin so verliebt (track 15) and the afore mentioned rumba (track 16). There's also much else.

Ulf Schirmer has excellent feeling for the surge of the operetta style and gives the waltzes and other dances the right lilt. The Munich Radio Orchestra play as to the manner born and the chorus, what little they have to sing, is as good as could be expected. The Bavarian Radio forces belong to the great vocal ensembles in Europe. The women's voices are excellent in the rumba, where also the orchestra has a heyday. About the solo singing I have a few reservations. Romanian soprano Elena Mosuc, whose Mozart recital on Arte Nova, issued a few years ago, is a favourite disc, has one of the loveliest lyric soprano voices around today. It is light, agile, beautiful and used with absolutely ravishing musicality. As heard here, however, she has adopted a vibrato that is very irritating which detracts from the overall positive effect of this set.. It is a thousand pities since she does everything so right. Her coloratura technique is second to none. Just listen to Bin verliebt where she pegs in each of the stratospheric notes plumb in the middle. For comparison I listened to the original Elisabeth, Gitta Alpár, recorded in 1930 (available on a Naxos disc, "Viennese Operetta Gems” 8.110292). Although very skilled, some of Alpár's highest notes are quite approximate. However, since she lacks Mosuc's vibrato her singing is more comfortable to listen to. Don't let these comments deter you from acquiring the disc, though, since there is so much that is good.

The other principal singer, Zoran Todorovich, has a near-ideal operetta voice: virile, expressive and with a lovely half voice. I hope that he will be used more often. Listen to his second act aria (track 11) where he is so honeyed, without being sugary, and also the third act duet (track 14) how he caresses the music. When we met a few years ago he expressed a wish to sing more operetta. Obviously his wish has been granted since this is at least his fourth operetta recording. If there is a drawback it is his inclination to push for volume, which sometimes results in a bleating sound. He has a brilliant top but a couple of times in this recording the uppermost notes become flat.

In spite of my reservations this is a recommendable issue and Lehár completists need not hesitate. General operetta lovers will also find a lot to admire.

I have, though, a few question marks and one or two really black marks concerning the production. CPO and the Bavarian Radio, who are co-producers, have chosen to let the main protagonists also sing the secondary couple, Mercedes and Sascha. This can hardly be described as authentic since the two couples actually appear on stage together. This can be a bit confusing. More confusing, and to me inexplicable, is that the music is not presented in the correct order. The synopsis gives an outline of the action. In the outer acts the musical numbers are reshuffled, seemingly at random. In spite of meticulous scrutinizing of the booklet I was unable to find a clue. There are no sung texts and, even more seriously, no tracklist, no song titles, no individual timings. The soprano aria Bin verliebt, bin so verliebt is identified in the synopsis: "But the princess can no longer contain herself and confesses to her unsuspecting aunt in well-worded coloraturas that she is 'in love' [track 15]”. Slipshod and/or condescending!